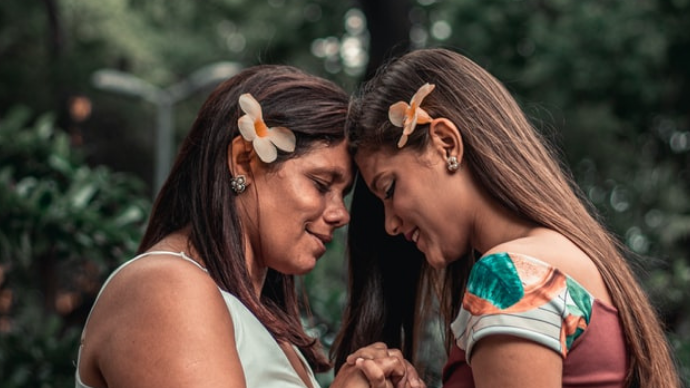 Scrolling through my Facebook feed, I recently read a post by an over-50 woman lamenting that she could no longer eat pasta. Dozens of women commented below, offering low-carb recipe substitutions, commiserating with her on the unwelcome midlife “muffin top.”

That post represents how most older women feel about their aging bodies. According to a 2013 study, “Characteristics of women with body size satisfaction at midlife” in the Journal of Women and Aging, an alarming 88% of women age 50 and over reported body size dissatisfaction. And that statistic doesn’t merely point to body image challenges.

Body dissatisfaction is negatively related to health behaviors and quality of life.

According to Dr. Elayne Daniels, an anti-diet, trauma-informed clinical psychologist, negative body image has an increased risk of health problems, including eating disorders, gastrointestinal disorders and nutritional deficiencies. It can produce low self-esteem, social withdrawal and avoidance of events and activities due to self-consciousness, increased pursuit of “diet” plans, engagement in risky behaviors like smoking to try to lose weight, and mental health challenges such as depression and anxiety.

On the other hand, satisfied women had a lower body mass index and reported fewer dieting behaviors and fewer eating disorder symptoms, which are rapidly emerging as a major public health problem for women at and beyond midlife, according to Margo Maine, a clinical psychologist, in her 2019 article “Body Image, Eating Disorders, and Women at and Beyond Midlife: The Nine Truths.”

Yet even among the 12% of women who reported body satisfaction, 40% admitted that a 5-pound weight gain would make them moderately to extremely upset. Weight and shape play a prominent role in how middle-age women feel about themselves, reports study co-author Cristin Runfola.

“Rather, it’s about building up a solid sense of self so that our appearance isn’t something that can make or break us anymore” says body image coach Summer Innanen.

“Diet culture, the beauty industry, Hollywood, etc., have told us that our destiny is dependent on being attractive, so it’s not our fault that we’ve conflated our happiness (and health) with looking a certain way” says Innanen.

But how can midlife women ditch body shame for appreciation?

Culturally, we need to shift away from the negative narrative about weight gain that occurs in women’s bodies throughout the life cycles. When we have open dialogue about these natural shifts, the shame fades.

“We gain weight at menarche, with the birth of each child, and we gain weight at menopause, so we’re not going to have the same body size and shape at 50 as we had at 20. And if we don’t expect that, that would be a help” says Joan Chrisler, a professor of psychology at Connecticut College and researcher of weight and eating disorders in women.

Maine agrees: “Today, we criticize an adult woman because she no longer has the body of a 16- or 20-year-old. Although natural for the adult female body, all weight gain is considered wrong.”

When Maine shares information about the incredible natural resources of the female body, she says women slowly begin to appreciate its natural wisdom and are more likely to make changes in their attitudes and behaviors. In her article, she states compelling facts about the protective nature of body fat such as:

– Women’s bodies are designed for survival, hardwired to beat starvation. In a famine, only about 10% of women die while as many as 50% of men will. It’s body fat that protects women.

– Before puberty, a girl’s body is about 12% body fat. After, it’s 17% in order to produce ovulation and menstruation. A mature woman’s body is about 22% body fat, “providing the energy necessary for an ovulating female to survive famine for nine months” says Maine. Thus, women’s bodies have the capacity to maintain the human race.

– The weight that women gain after puberty and menopause is protective. To preserve fertility, reproductive and feeding organs, women first gain fat in their breasts, buttocks, hips and thighs. During the transitional phase into menopause, weight gain of approximately 12 to 15 pounds along with about a 15% to 20% decrease in metabolism naturally occurs. These biologically programmed changes allow women to manage menopausal symptoms, maintain bone density and decrease the risk for osteoporosis. Maine says hormonal shifts during this transitional phase increase the size of fat cells surrounding our reproductive organs as these cells produce estrogen, offsetting the shutdown of the ovaries.

Furthermore, malnutrition and dieting in midlife and beyond can be particularly risky.

According to Maine’s research, depleted fat stores will likely increase menopausal symptoms, and muscle-wasting can reduce metabolic rate and hasten neuromuscular decline. She also found that cognitive impairment secondary to dieting may also be greater, and the mortality risk associated with low weight is greater as people age.

Research in the American Journal of Public Health study “Associations Between Body Composition, Anthropometry, and Mortality in Women Aged 65 Years and Older” found that women with BMIs in the “overweight” category from 25 to 29.9 had the lowest mortality. Moderate weight gain in midlife is associated with longer life expectancy for women.

Finally, Maine shares that “most — even well-informed, resourceful women — don’t know these facts. The truth is that the female body simply knows how to take care of itself.” Thus it’s key to women’s whole health to elevate the conversation regarding midlife body changes as natural and protective, not something to be ashamed of, but appreciated.

With these facts, one of Maine’s clients, a 73-year old woman who battled her body for decades, moved from body shame to appreciation, stating, “I used to see this roll around my middle as my spare tire, and I hated it. Now I see it as my life preserver!”

So ladies, instead of berating our bellies and restricting pasta from our plates, let’s make peace with and respect the wisdom of our bodies.

This article was originally published in the August 4th edition of the Jackson Hole News and Guide.